Herein, an account of the accidental landing at Queen Magna's Tomb-island:

Their cog, bound for the Kingdom of the Westlings, was struck by a terrible storm. On the fourth night the boat's master was washed overboard, the mast snapped raw and the freeboard torn away. Grey morning, however, brought sight of an island to the north. They rowed as best they could. 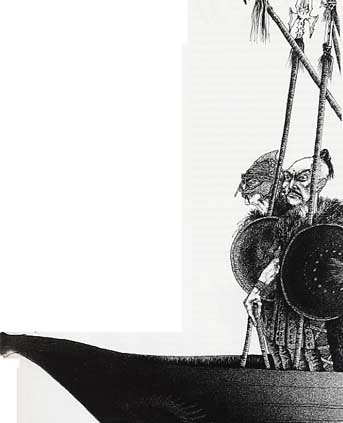 The island had a hard stone beach with a table of chalky cliff above and, higher still, a sharp, stone spire. The party circumnavigated the island and found fresh water. Climbing to the tableland they met thick orange lichen dotted with small reflecting pools. On closer view, these pools were found to be the dwelling-holes of strange, translucent amoeboids that lunged for unclothed flesh but shrank from steel.

A howling flock of winged wolfhounds descended upon the shipwrecks here. One of the sailors was rent apart before the animals were driven off with the aid of the apiarist's smokebomb.

At the base of the spire was a hut of stone. No one was there. Under a threadbare blanket was a shaft and ladder down. Torches were prepared by hacking into the lichen and affixing tufts of it to wooden clubs. In the dark cellar were found barrel upon barrel of delectable grain spirit. The night was spent.

Next day, heading east, the party sighted below their cliff a pair of beached reaver ships and a camp of the fierce pirates in a little harbour. A few reavers were spotted climbing the cliff, but these fled upon sight of the party.

Another battle with the voracious wolfwings killed one more sailor, but did not end before the ursar pinned one of the beasts and trussed it, whimpering, to the end of his catchpole.

South of this battlesite was the entrance to what appeared to be a tomb. Here beneath a rockfall perished Malté, the party's apiarist. His goggles and bellows were quickly taken by his companions.

Underground, a forking path led the party first to the bare tomb of what appeared to be nothing more than a long braid of hair; though cold to the touch it was woven through with cloth of gold and so they paused to disentangle the treasure before sealing the hair back in its stone casket. Back along frescoed halls they found a smaller casket (where Pilsner, the therapist, stuffed his meditation cushion into the mouth of a trapped stone head to arrest the flight of a dart) and though the casket held a doll with a jewelled eye, the party abandoned this oddity when the head of a large serpent appeared from within a natural chimney in the stone. They lit fires in the tunnels and fled.

Upon returning to the stone hut, they found it inhabited. Oolo called himself an old knight of Queen Magna, who was buried on the island; he and his companions guarded her resting place to ensure silent, eternal punishment for her great sins. The knight was impossibly old and accoutred in sackcloth with a full chainmail suit and a mighty, double-handed rune-axe. He happily shared his whiskey – some of which had already been stolen by the party – and he seemed quite deranged. He entreated the party to kill or drive off the reavers who, he said, were intent on making a Tortuga of the island – this despite the fact that the reavers dared not tread upon the lichen, thinking the cliffs haunted. He told them that he was scheduled for relief when his whiskey ran out. He taught them a whistle that would keep the wolfwings at bay.

Next day's attempted reconnaissance showed that the reavers had found what was left of the cog and were stripping it for goods. At the spring the party clashed with a small band of them. Pilsner was struck but survived the axe-blow, then one of the reavers was pitched to his doom off of the cliff, another was slain, and the remainder fled. A shield was recovered but it was a pyrrhic victory.

Counsel was held, and though the thought of attacking the pirates with flaming whiskey barrels was considered, in the end it was parley – and possible escape from the island – that the party decided upon.

At sun's height they approached the reavers' camp and called at the picket for a meeting with their chief. One of the reavers threw down his weapons and put up his fists in answer. The ursar quickly did the same and quicker still his opponent was downed, coughing bloody foam. (He would survive, but barely.)

Nonplussed, the other reavers left to fetch their leader, Rooki Blacktooth, who appeared dressed in checked jacket and smiling checker-stained teeth. He carried a strange bronze wand and a thin sword. The party bowed and then regaled him with an exaggerated story of their shipwreck and their wanderings on the ghost-haunted lichen-lands. (They made mention neither of Oolo nor what they had found in the tomb.) Rooki was impressed with their tale, and he accepted their offer to join with the reavers – although he insisted that they were not free men until they had paid him the blood-price of one gold ring for each of his men killed. Until such time they were in his bond...

at 21:42
Email ThisBlogThis!Share to TwitterShare to FacebookShare to Pinterest
Labels: 2D6, A Dangerous Time 1 – the Shipwrecks, actual games, ship people